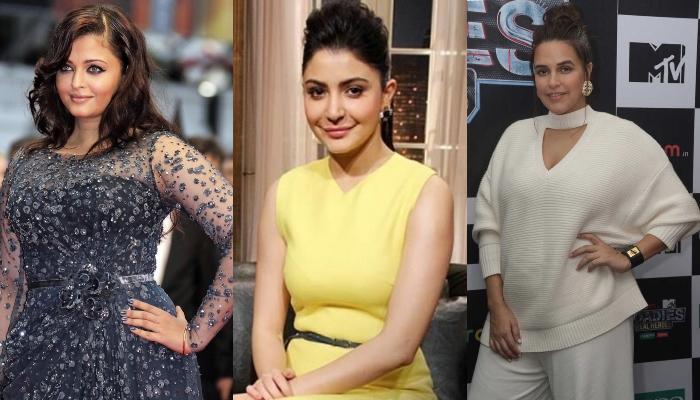 Body shaming is a sin, but sadly, some people find it amusing to troll others for their body measurement. Be it for right or wrong reasons, some people never stop judging women bodies, and women for their bodies and pointing out their flaws. Women are expected to have a perfectly toned body, even after they give birth to a baby and go through tremendous changes. Anyhow, they receive extremely rude comments and criticism from anonymous people online and people in the real world. Most of all, the actresses are always under scrutiny for their looks and thus, become frequent victims.

Moreover, the unrealistic beauty standards of the Bollywood industry have made the trolling brutal for the actresses. Along with dealing with their hectic schedules, they have to deal with body shamers and their insensitive comments. However, the divas prove that they are confident in their bodies and flaunt their imperfections. Here is a list of Bollywood actresses who got body-shamed from “Too Fat” to “Too Thin”, and everything in between.

Recommended Read: Navya Nanda’s Reply To Troll Asking Her To Get A Job Proves She’s As Calm As Mamu, Abhishek Bachchan Fat shaming is not OKAY, but people don’t get it. They pass comments on others for being “too fat” or “too skinny”. After becoming a mother of her first child, Mehr, Neha Dhupia was mercilessly trolled online for gaining weight. 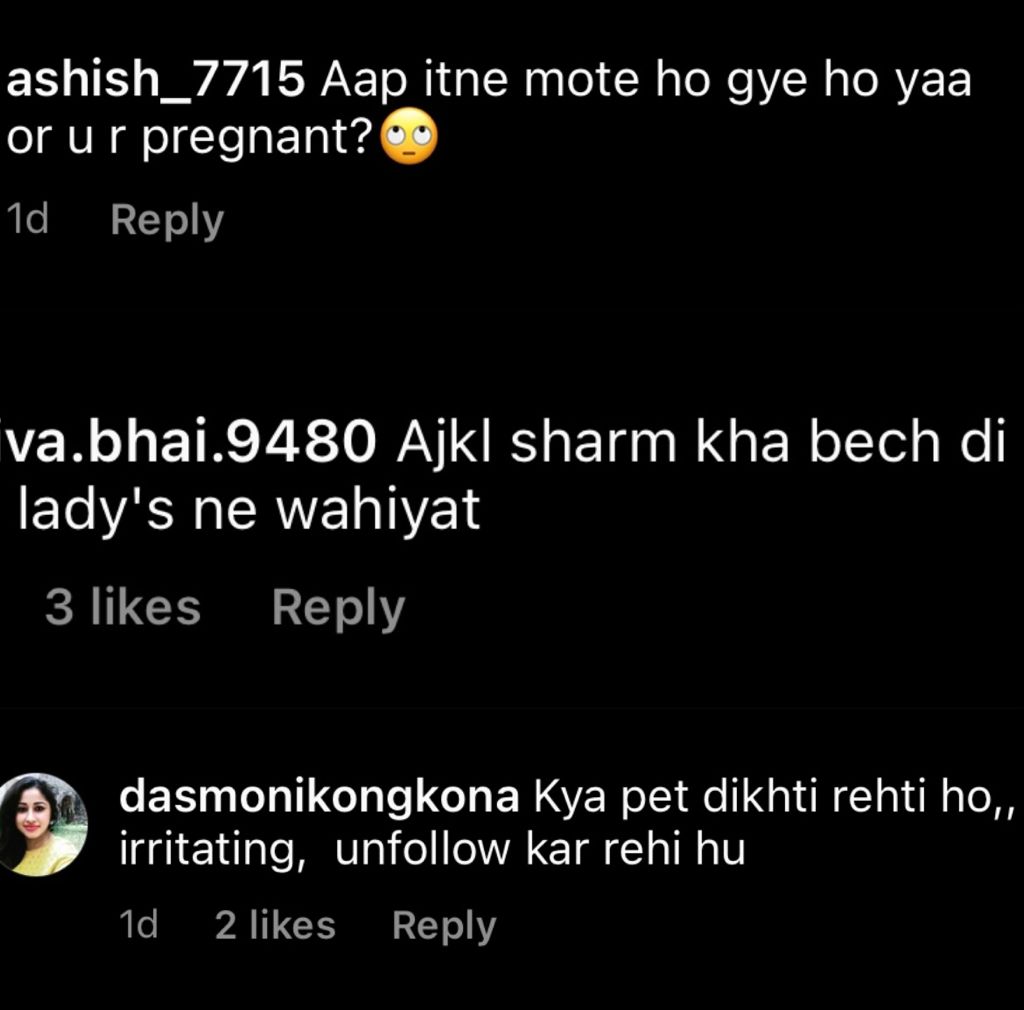 However, the Chup Chup Ke actress, who is known for her bold life choices, had said that she was unbothered with those remarks. In an interview, Neha had also said, “But I do want to address this as a larger problem because fat-shaming needs to stop for everyone, not just celebrities.” 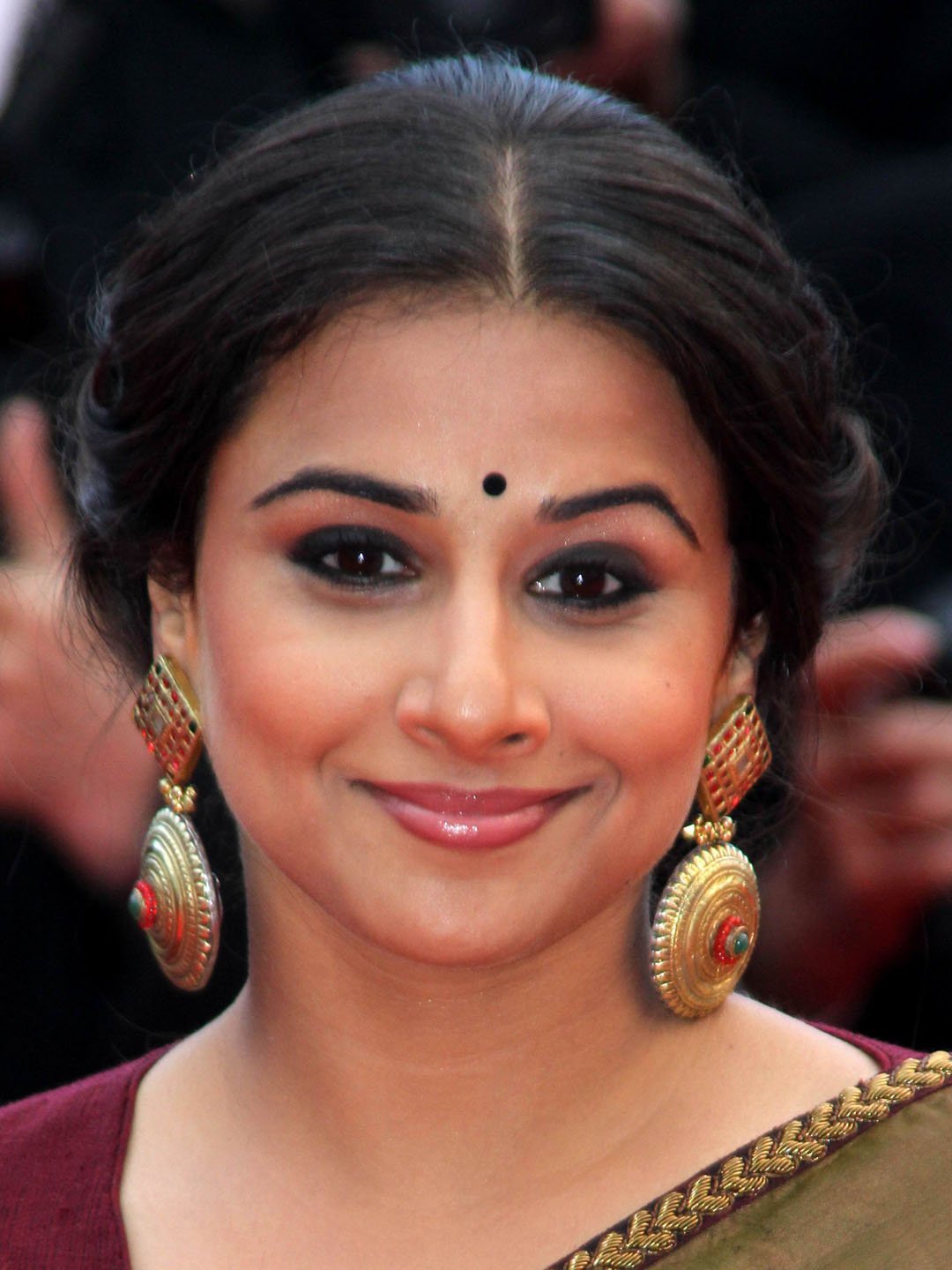 The real Sherni of Bollywood, Vidya Balan, always takes a stand against unrealistic beauty standards. She had revealed that she didn’t want to look slimmer in her pictures than she really is. In addition, the Dirty Picture actress was told to start exercising and to lose weight by some anonymous people online. In an interview with The Times of India, Vidya had said, “I’ve had hormonal problems all my life. It’s probably because of the judgment I’ve carried around my body. When I was a teenager, people would tell me, ‘You’ve got such a pretty face, why don’t you lose some weight?” 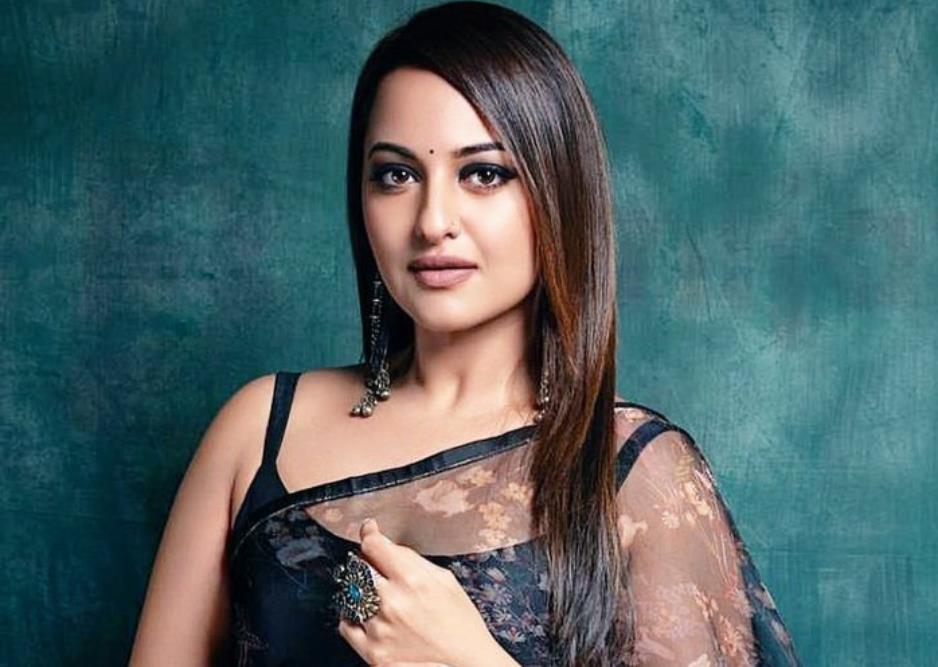 Sonakshi Sinha is no stranger to trolls and body shaming. The Dabangg actress has often been subjected to body-shaming and rude comments on her social media posts. In addition, the actress had a tough time dealing with people bullying her for her weight during her childhood. Surprisingly, even after shedding down her weight after becoming an actress, the trolls followed her like a shadow. 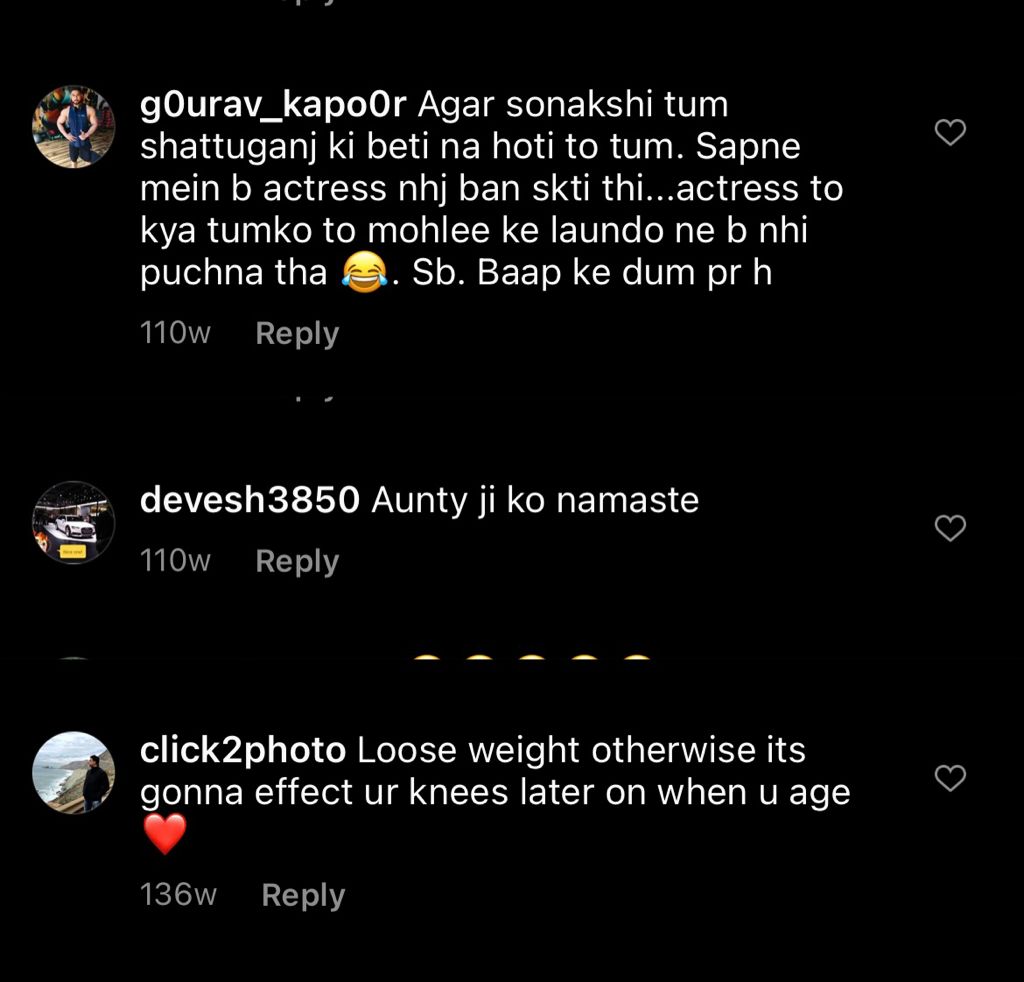 Sonakshi Sinha had felt angry, hurt and even numb, but she didn’t give up. Instead, she had taken to her Instagram handle and had uploaded a video with the caption, “For years I’ve been trolled because of my weight. I’ve never felt the need to react because I always believed i was #BiggerThanThem… pun intended.” You must be surprised after seeing the name of one of the most beautiful women in the world, on this list. Unfortunately, people have the audacity to troll Aishwarya Rai for her looks. The Sarabjit actress had gained weight during and after she was pregnant with her daughter, Aaradhya. People had attacked her online for her transformation, but she didn’t pay any attention to them. 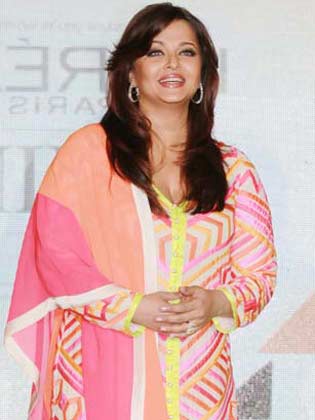 However, her husband, Abhishek Bachchan, couldn’t tolerate this and stood up in her defence. He had said, “Yes, she’s a public figure, but people forget she’s also a woman and now a mother and there’s a line that’s not to be crossed. I don’t talk that way about any woman ever and it’s obviously not graceful for anyone to talk about her like that either.” 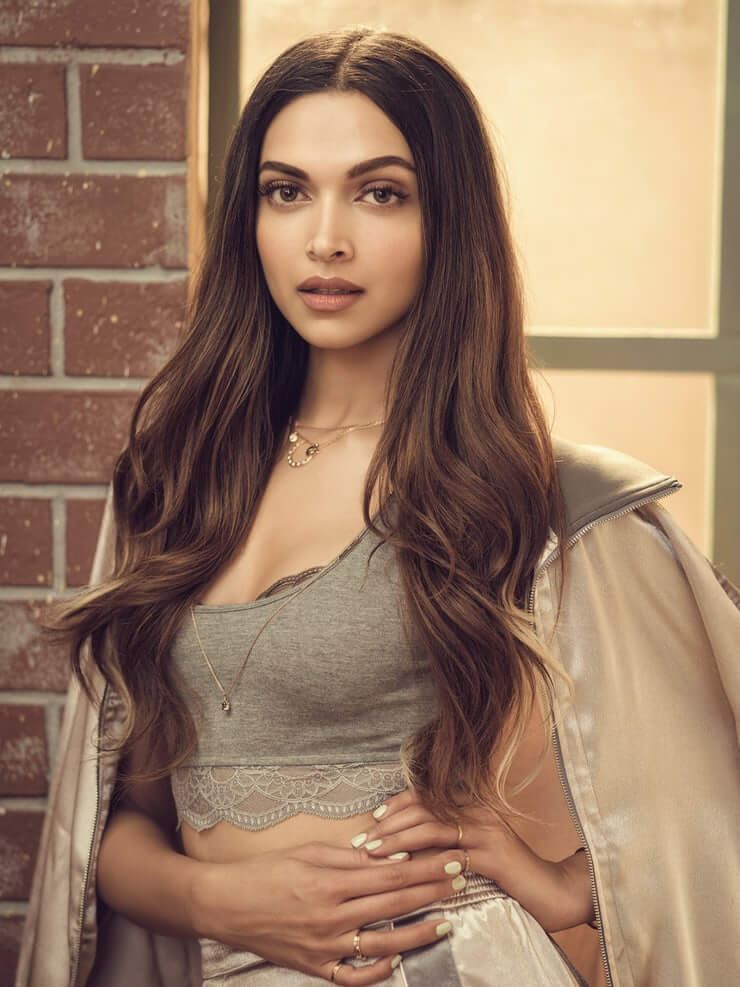 Another surprising name in the list is Deepika Padukone, who is one of the most beautiful actresses in Bollywood. The Om Shanti Om actress also got body shamed for being ‘too skinny’. Deepika had posted a picture on her social media flaunting her beautiful dress and flawless look. But sadly, some people had started posting hate comments on her picture and had called her ‘too skinny’. 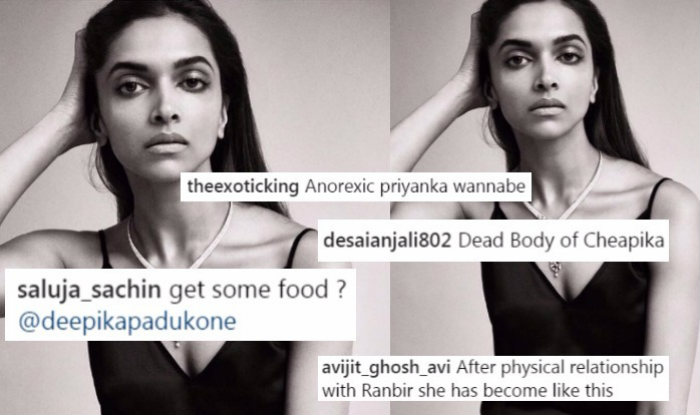 People even fell to the level of posting mean comments saying ‘Get some food’ and ‘She is suffering from malnutrition’. However, the Queen of Bollywood chose to stay quiet and let people say whatever they wished to. 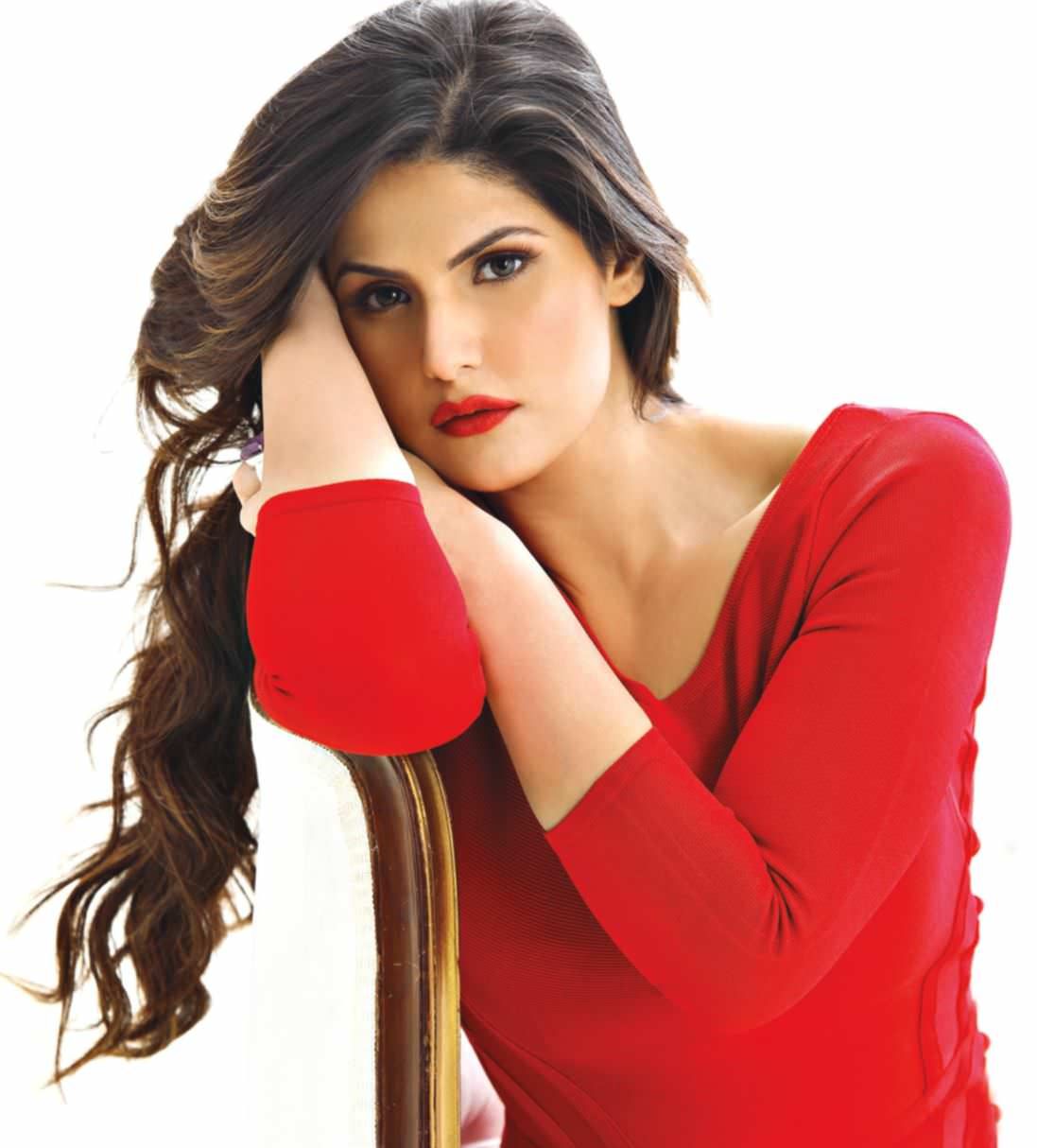 The Hate Story 3 actress is known for her chubby and bold look. Zareen is often trolled for her body weight and body size. Most of all, the actress was shamed for her stretch marks in one of her pictures. However, she knows how to slam the people, who troll others for their looks and body measurements. 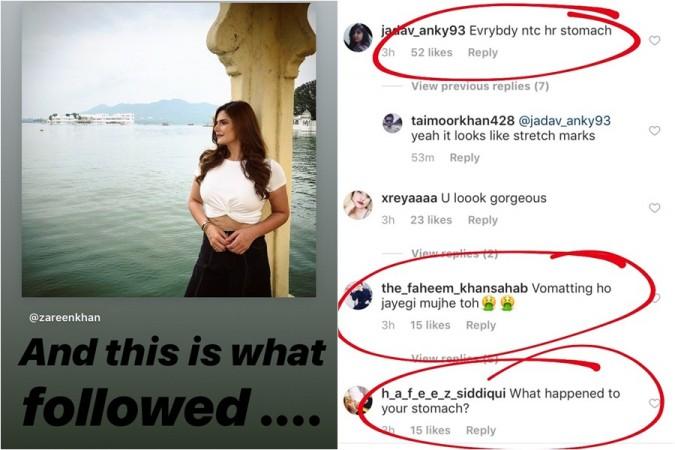 She had taken to her Instagram and had posted a collage of two of her old pictures, one from class 9 and the other from class 12, and in a long message, she had written, “I never let people’s comments or ideas about me bother me. Because it’s my life and my body and only I have the right to decide what I’m gonna do with it… Along with the weight loss came a lot of stretch marks but instead of feeling ashamed of it and trying to hide it, I believe in flaunting it. It makes me feel like a tigress with her stripes”. 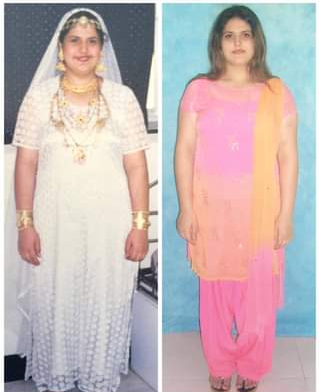 Also read: From Strangers To Famous ‘Kabir Singh’ Duo, Sachet-Parampara Fell In Love In The Most Beautiful Way 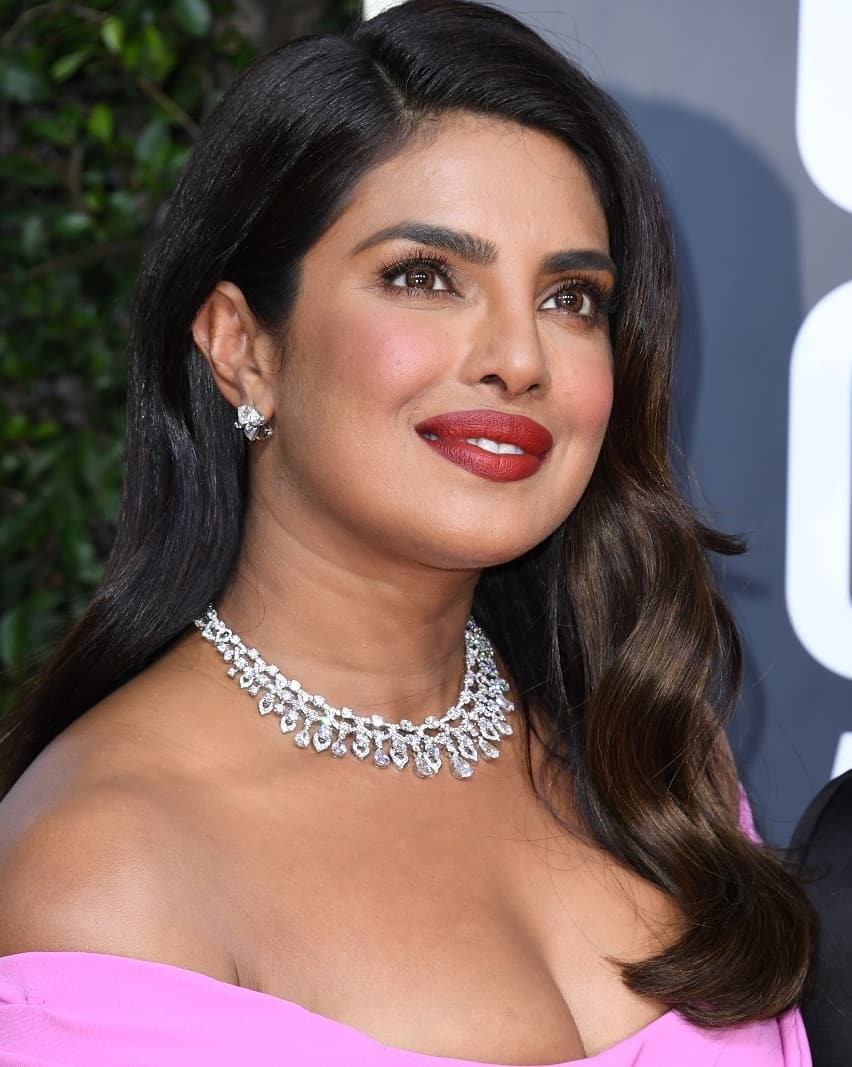 The Desi Girl of Bollywood, who is famous for her humanitarian activities and outstanding acting skills, is not new to trolls. Priyanka had revealed that she was body-shamed for not matching the unrealistic standards of beauty. On the chat show, The View, she had said, “Before I became an actor, I met a producer-director about the possibility of acting. I was a beauty pageant winner at that time; I was Miss World. And he said that everything was wrong about me. He said my nose was not proportionate, the shape of my body was not proportionate.” 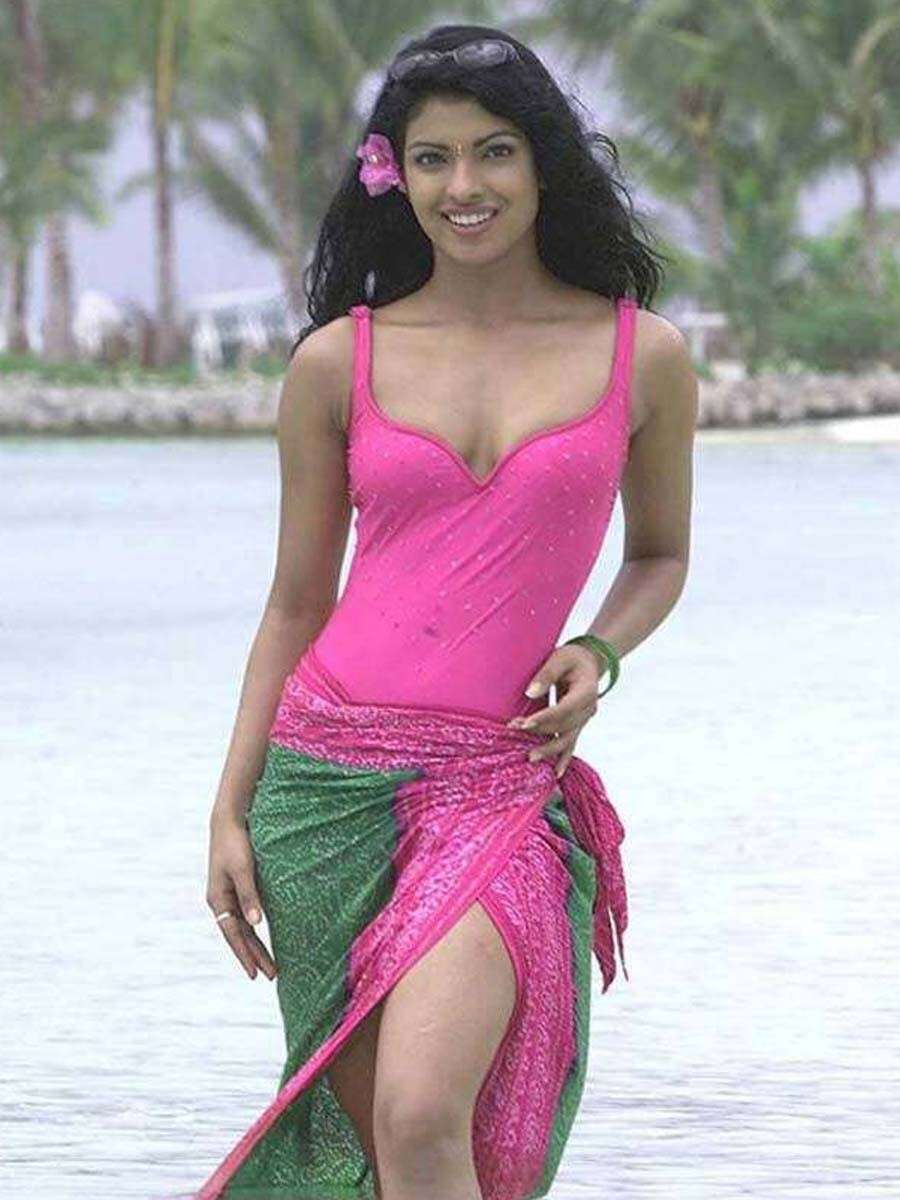 The Dostana actress had further added that her body weight is bound to fluctuate and had said, “There is a false perception of what our bodies should look like. Especially when you are in the business, you put on a couple of pounds and people are body shaming you. It happens. Christmas happens to all of us. I am an Indian so I have Holi, Diwali, and my body fluctuates and I am fine with it”. 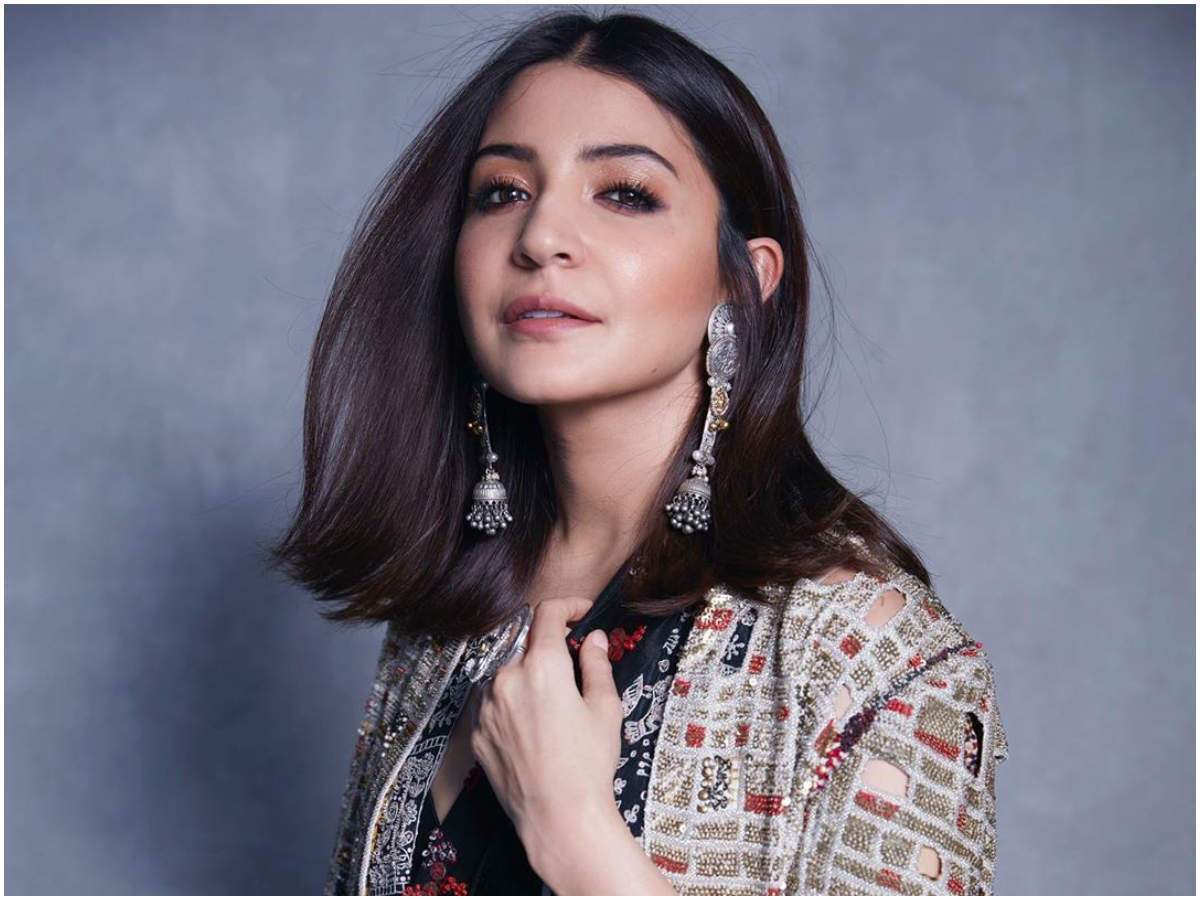 The Ae Dil Hai Mushkil actress has successfully made her place in the industry as well as in the hearts of millions of people. The beautiful actress had received criticism from all quarters for opting for plastic surgery and lip-fillers. 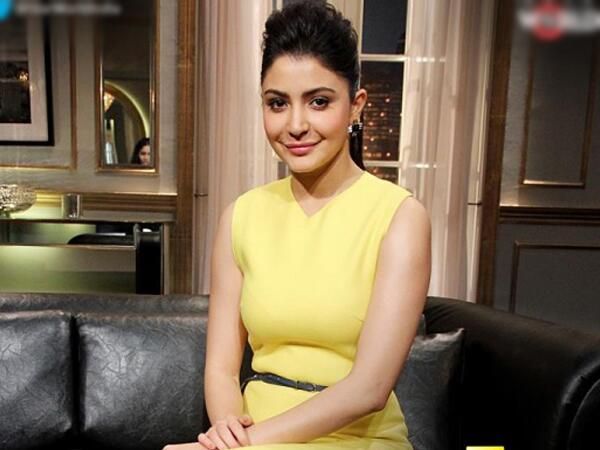 After her appearance on Karan Johar’s show Koffee with Karan in 2014, people had commented on her lip enhancement surgery and had said several mean things to her. But Anushka had stood firm and had said that she is “a human and not perfect.” In addition, the Jab Harry Met Sejal actress had also said, “I didn’t think I had to inform the world before getting my lips enhanced. It’s my body and my decision. This was my decision and was done for the sake of my look in my film ‘Bombay Velvet’.”

Also Read: 7 Times Anushka Sharma Cheered For Virat Kohli During His Tenure As Captain And Won Our Hearts 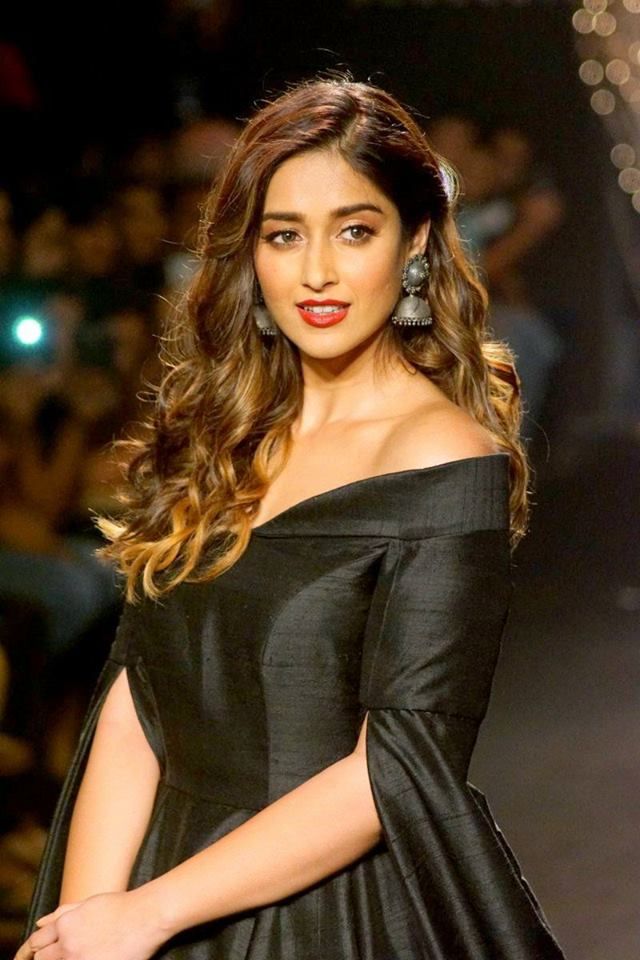 When it comes to body shaming, Ileana never missed a chance to be vocal about the issue and address it. The Barfi! actress, has often been teased for her body type and was subjected to body shaming as a 12-years-old girl. As a result, it had left a deep psychological impact on her. Ileana has been fighting with Body Dysmorphic Disorder and depression, but people never cease to body shame her.

In an interview with Bollywood Bubble, the Rustom actress had said, “It takes a lot of inner strength to tell yourself that what they are saying doesn’t matter. What you feel about yourself is most important. And it’s something I tell myself every single day.” 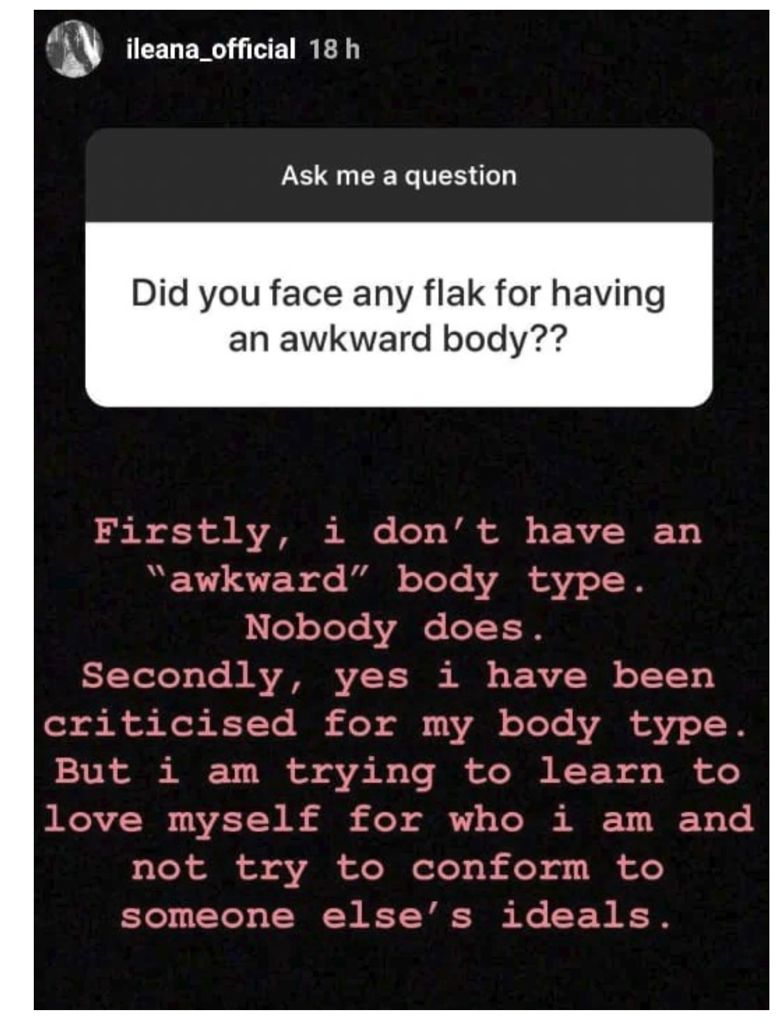 Responding to the comments of one of her followers on Instagram, Ileana had said, “I don’t have an ‘awkward’ body. Nobody does. I have been criticised for my body type, but I am trying to learn to love myself for who I am and not try to conform to someone else’s ideals.” 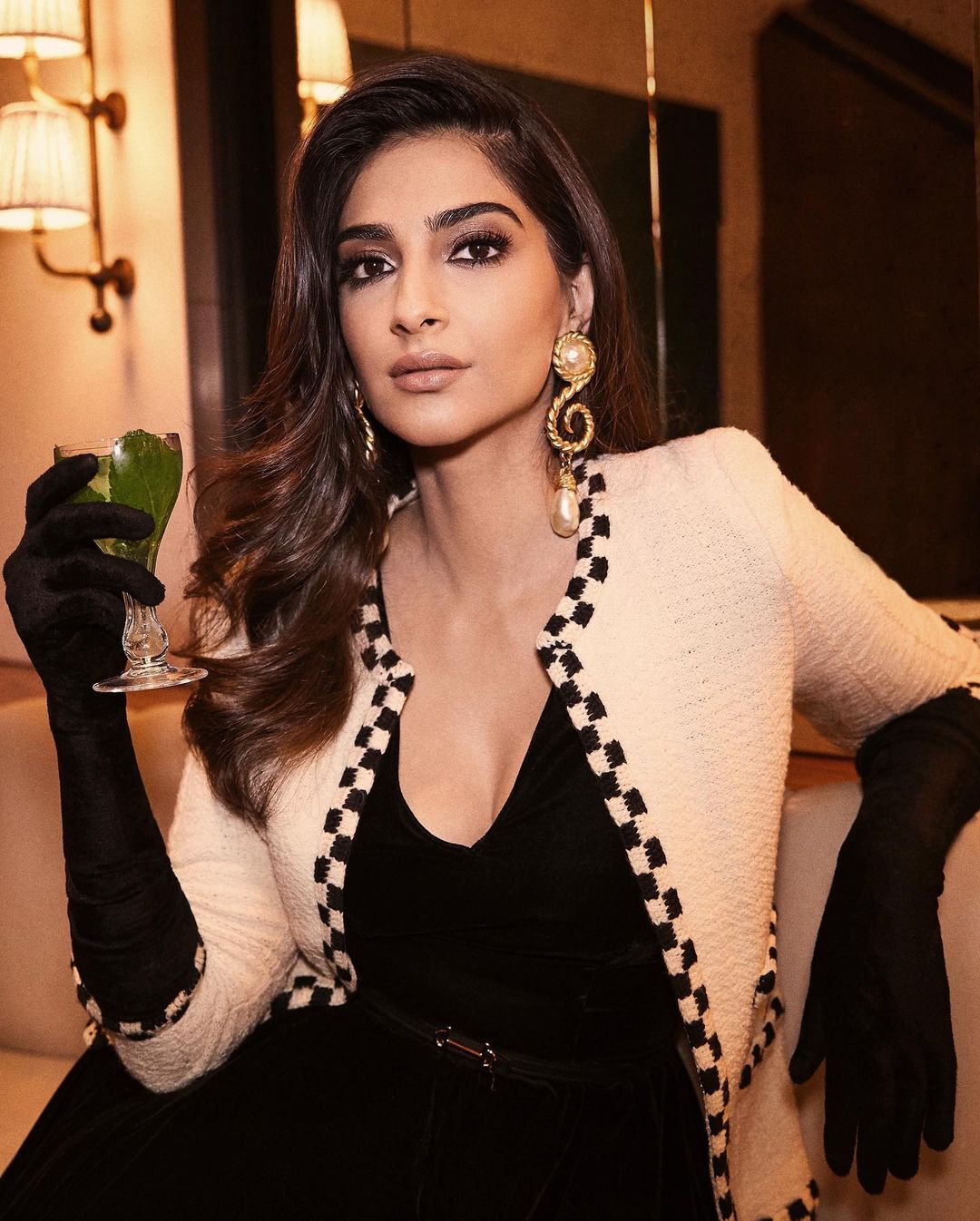 The Saawariya actress, Sonam Kapoor Ahuja, is a confident and successful woman. Though the actress is no stranger to trolls, at times, she deals with fluctuating self-esteem. From her body measurements to her outfit choices, Sonam has been trolled multiple times. In an essay, Sonam had revealed that she had begun hating the way she had looked without even reading tabloids articles pointing her flaws out. 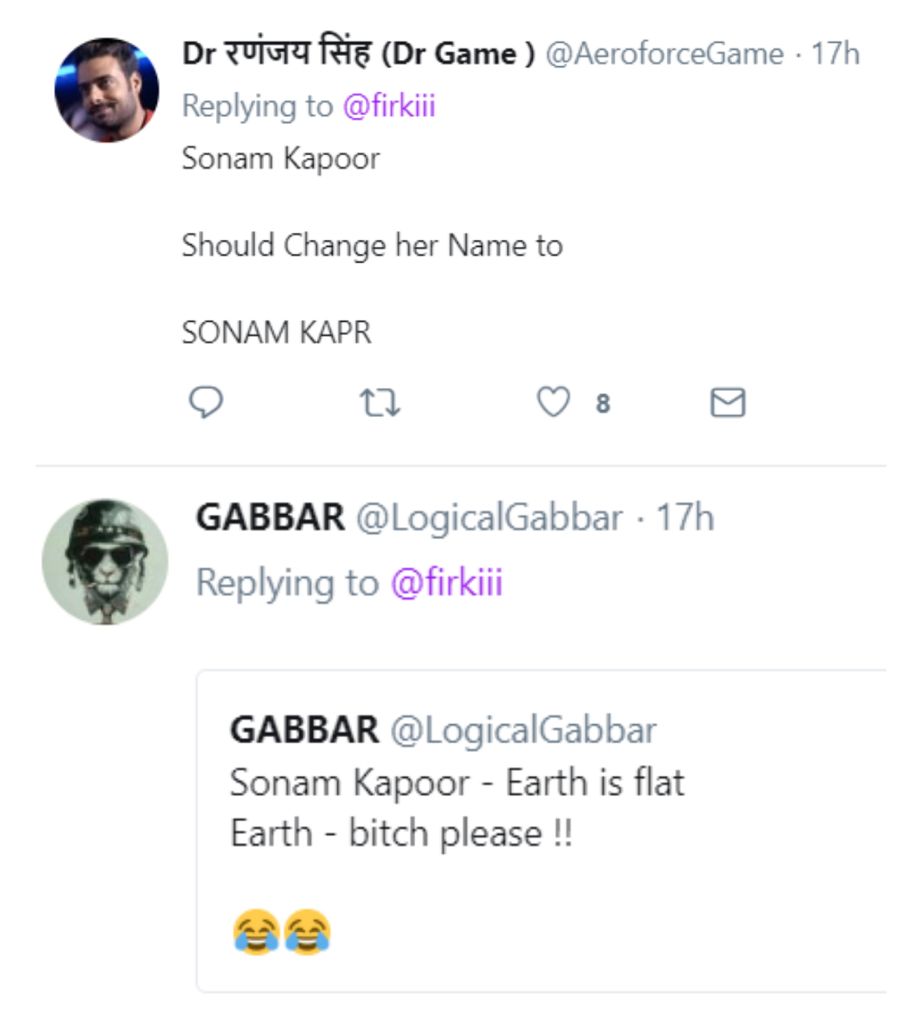 Addressing her weight issues and incessant trolling, Sonam had opened up in an interview with Buzzfeed. The Veere Di Wedding actress had said, “I constantly worried that, if asked to dance in a backless choli, rolls of back fat would give me away as an imposter to the industry. Nobody lines up to buy tickets to see cellulite. The ball is in the media’s court to celebrate fit bodies rather than thin ones, and to know the difference. I know now that there’s nothing wrong with stretch marks, cellulite, or scars. They’re markers of our growth. There’s beauty in their realness.”

Imagining a world with every single person having the same look, is boring. Thankfully, we all come in different shapes and sizes, and thus, we should celebrate our body and love it.

You May Also Like: Smriti Khanna’s Befitting Reply To Trolls, Who Targeted Her For Getting Back In Shape Post-Pregnancy

This amazing article on “Bollywood Actresses, Who Got Body-Shamed And Clapped Back At The Trollers” was originally found here