Many people are aware of the performance of famous Bollywood actress Anushka Sharma and her production house Clean Slate. Apart from this Anushka also has her own clothing brand ‘Nush.’ She also promotes it on social media from time to time. Now Priyanka Chopra has made a choice of Anushka’s brand of clothes. Anushka has also reacted to this. 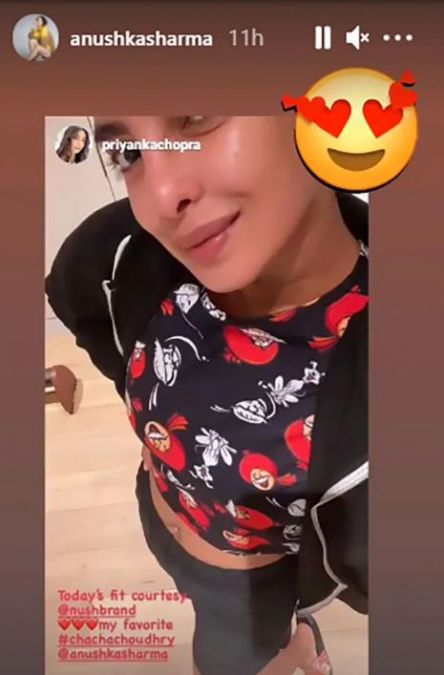 The same Priyanka Chopra has done true casual outfit with black and red combination from Nush clothing brand. Sharing her selfie in this outfit with a print of Chacha Chaudhary cartoon, she wrote, ‘Today’s outfit Courtesy @nushbrand my favorite #chachachoudhary @anushkasharma.’ Anushka shared this post of Priyanka and put a heart-eye emoji on her. It is clear from this that Anushka has liked this outfit on Priyanka.

While Anushka has her own clothing brand, Priyanka has also entered different business fields. Priyanka has her own beauty product brand and restaurant. The two actresses also have similarities with social work. Anushka raises her voice to help animals through PETA while Priyanka is associated with UNICEF. The two actresses also praise each other’s work. Anushka had named Priyanka Chopra without any delay when asked about her favorite actress in the promotions of the movie NH10.

After years, these 4 legendary superstars of Bollywood will be seen in a film