Skip to content
September 5, 2021 Bakes n Buds
With great relief, expectation and hope, Bollywood (channelising Jaya Bachchan’s character welcoming Shah Rukh Khan’s Rahul in Kabhi Khushi Kabhie Gham) finally rolled out the red carpet at theatres last month, luring in the audience with big releases like Akshay Kumar’s ‘Bell Bottom’ and Amitabh Bachchan-Emraan Hashmi starrer ‘Chehre’. But is the audience really sprinting towards the box office like SRK did towards Jaya Bachchan’s pooja ki thaali in K3G? Have the losses minimized? Or is Bollywood looking at another glaring regret in the face of the pandemic?

Everything doesn’t quite look hunky dory as producers of Kangana Ranaut’s ‘Thalaivii’ have locked horns with multiplexes over when they can premeire the film on OTT platforms. Producer Vishnuvardhan Induri wants to see the film streaming on air just 14 days after the theatrical release, but the multiplex owners want that to happen only after 4 weeks. Looks like, all parties involved in the release of movies, have yet to come on the same page.

In this week’s #BigStory we unravel the facets behind the brave decision of Bollywood lining up movies and building the first bridge towards a resurrection of the 100-crore club.

Is Bollywood regretting its decision to release movies amid restrictions?
In a bid to revive the euphoria of big screen entertainment, Akshay Kumar took the risk of releasing his tent pole spy drama ‘Bell Bottom’ in theatres as restrictions were lifted. This move was positively welcomed by theatre owners who have finally registered some income after bearing losses for over a year. Despite ‘Bell Bottom’ not fetching big numbers, Kunal Sawhney, COO Carnival Cinema sees the emergence of a positive trend, “Post this second lockdown, people are very positive to come to cinemas. We have seen every week that there is an increase in admits. Now people from all age groups, right from kids to senior citizens are coming to theatres. Regional/Bollywood & Hollywood movies which have released in the last three weeks have seen a good number of footfalls.” Interestingly, advance booking has also witnessed a boost and Carnival Cinemas confirmed that they have housefull shows with the government induced 50 per cent occupancy restrictions. There has been a week on week increase in admits from August 5 with more than 80 per cent occupancy. 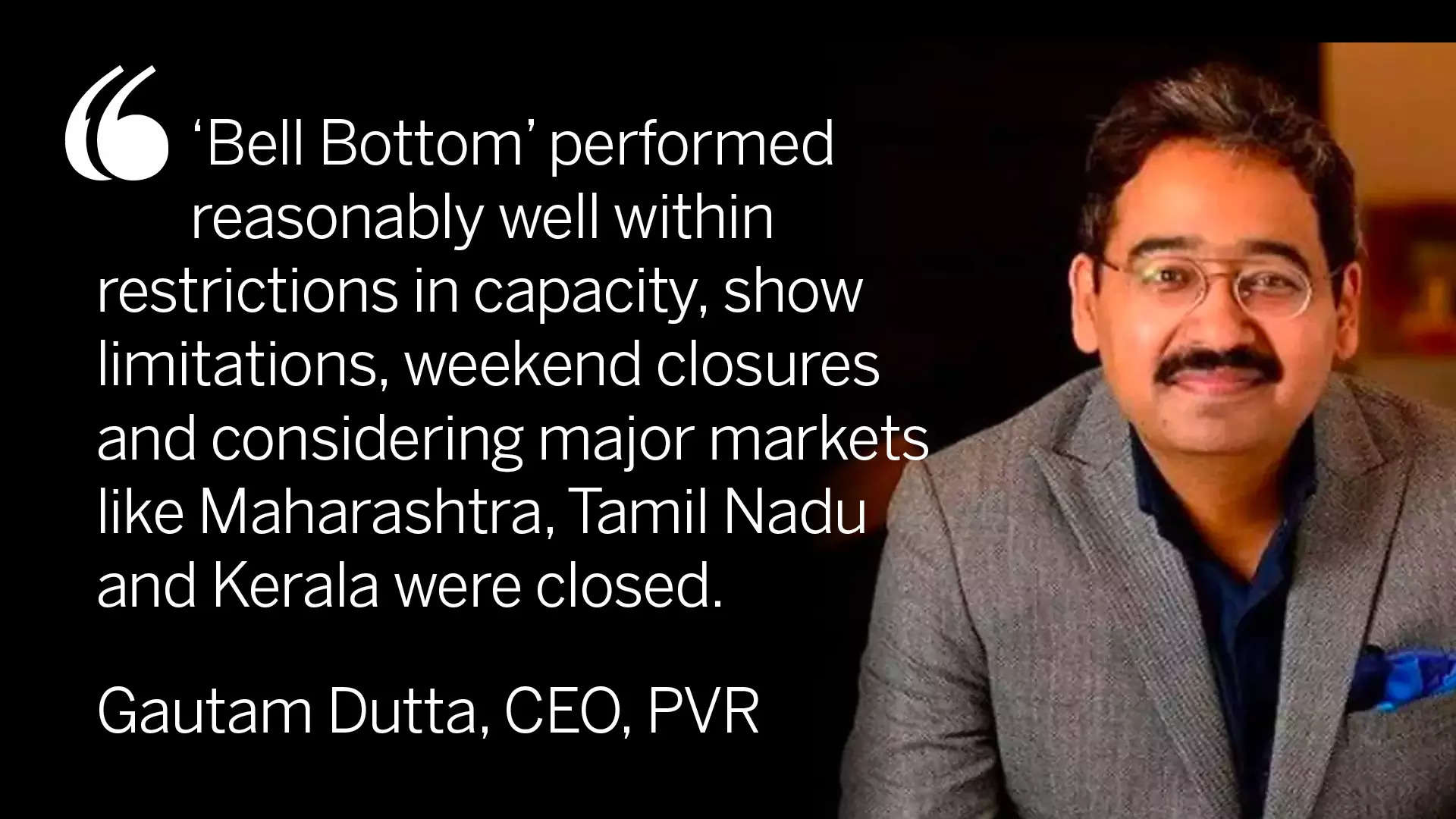 Gautam Dutta, CEO, PVR Limited is also hopeful that the success of ‘Bell Bottom’ and ‘Chehre’ will encourage other filmmakers who have been holding onto their projects for better times. “’Bell Bottom’ performed reasonably well within restrictions in capacity, show limitations, weekend closures and considering major markets like Maharashtra, Tamil Nadu and Kerala were closed. We are truly encouraged by the release of the long awaited ‘Chehre’ on August 27th. Hope this will encourage producers from the Bollywood fraternity to announce their big films for theatrical release and attract movie goers to cinemas.”

Emraan Hashmi is also happy with the decision of the makers to go ahead with ‘Chehre’ despite restrictions. Presenting a different perspective with no iota of regret, Emraan adds, “I am very happy with the response as the audiences are loving the film in theatres and appreciating the performances. I also feel there’s an interest cost for the producers as Chehre was ready to release in 2020 but then lockdown happened. They didn’t have a choice and couldn’t hold the release anymore. I feel as an industry, we all have to support the theatres and plexes. The salaries of their staffers are dependent on our films. We have to keep supplying films so they can survive. Most importantly, we have to get the public back to theatres anyhow.”

But where is the money and what does the box office score say?
On the contrary, one look at the box office score in the re-opening phase and the numbers paint a picture of pity. ‘Bell Bottom’ has managed to hold on for a few weeks only with around Rs 25 crore but is nowhere close to ‘whopping numbers’. On the other hand Amitabh Bachchan and Emraan Hashmi driven ‘Chehre’, which also features Rhea Chakraborty, has barely managed to scrape by with earning just a couple of crores. Ask Emraan if the box office numbers bother him and he asserts, “We knew that box office was not the yardstick at the moment, our yardstick was that Chehre is coming out in the theatres. We are heroes because of the theatres.”

Giving an insight about how the producers are cashing in on their investments, movie business analyst Atul Mohan opines, “Both the films have not made any losses as such, they are very much in the profit zone. ‘Bell Bottom’ got a good digital deal as well as satellite and music rights earned back the investments with profits. And same goes for ‘Chehre’ as well, they made good money with their OTT deal. The ratio of profit is less, but that is part and parcel of any business. But thankfully for all the avenues that have opened up, which can monetize films.” While producers, cinema owners and actors are singing paeans for the sudden thrust of content, where exactly is the money? Movie business analyst Atul Mohan gives the real picture, “1200-1500 theatres across India have shut down completely in MP, UP, Punjab, Bihar and several other states. This is affecting the screen count and hitting the box office numbers. Unless Maharashtra opens up, no producer is going to take a chance. With ‘Bell Bottom’, the trend is a bit positive but at the same time the multiplexes should keep the prices attractive. I have observed that tickets are still being sold for 750-800, recliners for 400, so why would people come? People are facing job cuts, salary cuts, so cinemas will be last on the list unless the prices are attractive.”

Exhibitors too are still lamenting about the losses. Sunny Khanna, exhibitor and distributor for ‘Mumbai Saga’ expresses, “Theatre owners are very happy with both the releases, ‘Bell Bottom’ and ‘Chehre’. It’s not about number game and occupancy as of now. Yes, there used to be an average occupancy until Covid hit us. But it’s a good sign that theatres have atleast opened up and it is important to get audiences inside. BO numbers aren’t important since the people aren’t used to theatres now. People have moved on to OTT’s all this while and the audience has forgotten theaters. Exhibitors are thankful to the producers, who have taken a step forward. We have to supply more films to the theatres, if more films won’t come, then again theatres will shut. I am confident that cinemas will be back but it will take time. We need support from all the producers and request them to keep their line ups ready. Exhibitors are facing losses at the moment. If we evaluate the share and expenses, it’s surely a tough time for the next six months for the theatres. The only focus is to get the audiences to the cinemas as of now. Cinemas are anyway paying the electricity bills and salaries of the staffers even during the pandemic. The whole chain of producer-distributor-exhibitor will be revamped but it will take time but I think it’s a good start.” 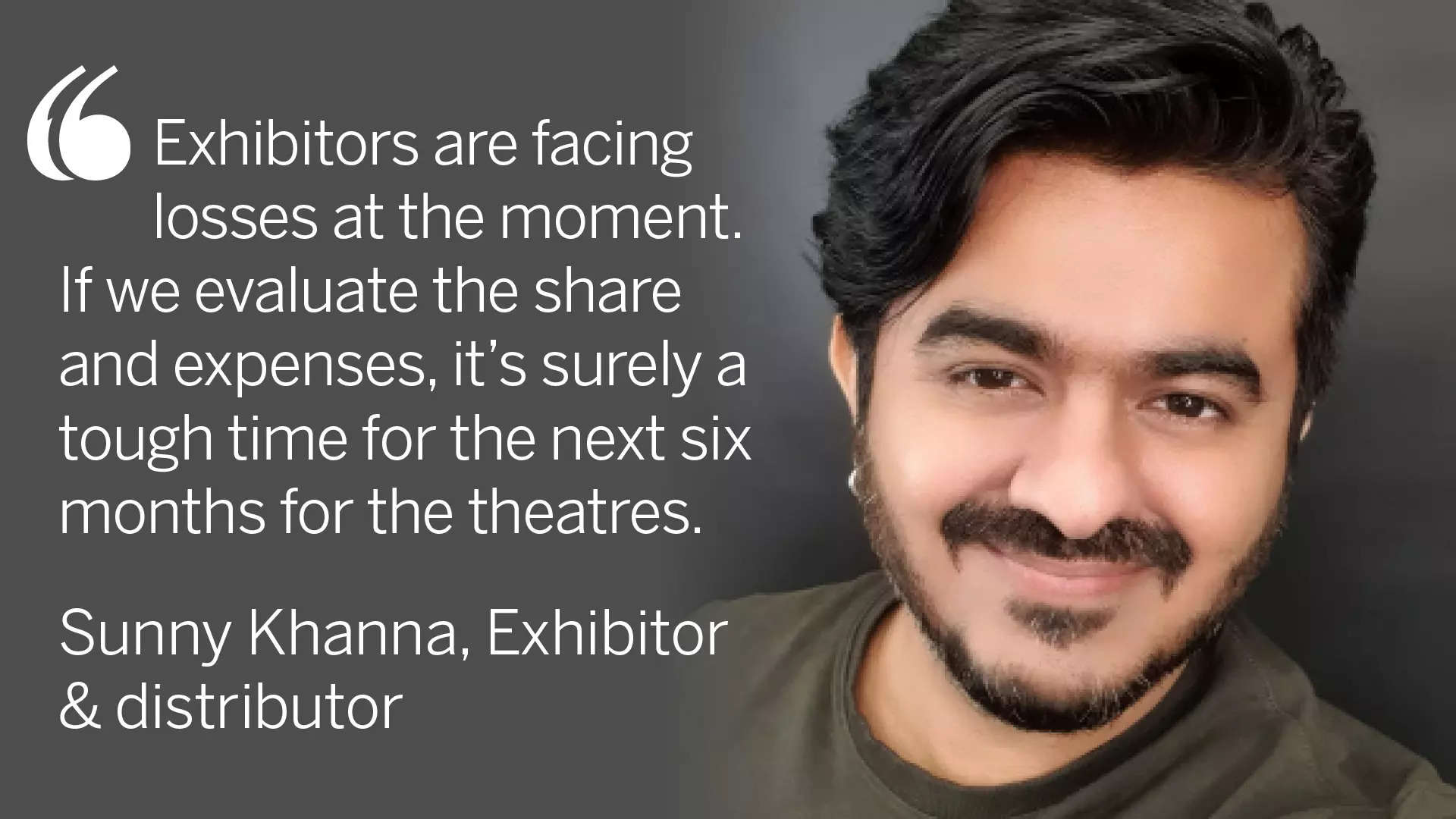 So, what does the future look like?
Despite a poor score, these box office figures are not exactly scaring anyone away. Bollywood continues to march ahead with back to back releases. Come Friday and Kangana Ranaut starrer ‘Thalaivii’, which is a biopic on J Jayalalithaa, is scheduled to hit the screens despite theatres being shut across the biggest money-spinning circuit – Mumbai. Bhagyashree, who makes a comeback with this movie, shares, “People are actually looking forward to this biopic because she led a very colourful life. There is never a right or wrong time to release a movie. People in the South have been waiting for far too long for the autobiography of CM Jayalalithaa. Their connectivity with the subject is far greater than those in Maharashtra. I think we, from the film industry, are connected to the subject because it is being made on such a big scale. I would have loved it to be released but, I would still say for people who have been yearning and wanting to see the film, which are more people down South, they deserve to watch it rather than holding on for a longer period of time.” Festive dates are also booked like before with Diwali and Christmas celebrating biggies like ‘Jersey’ and ‘Laal Singh Chaddha’ respectively. 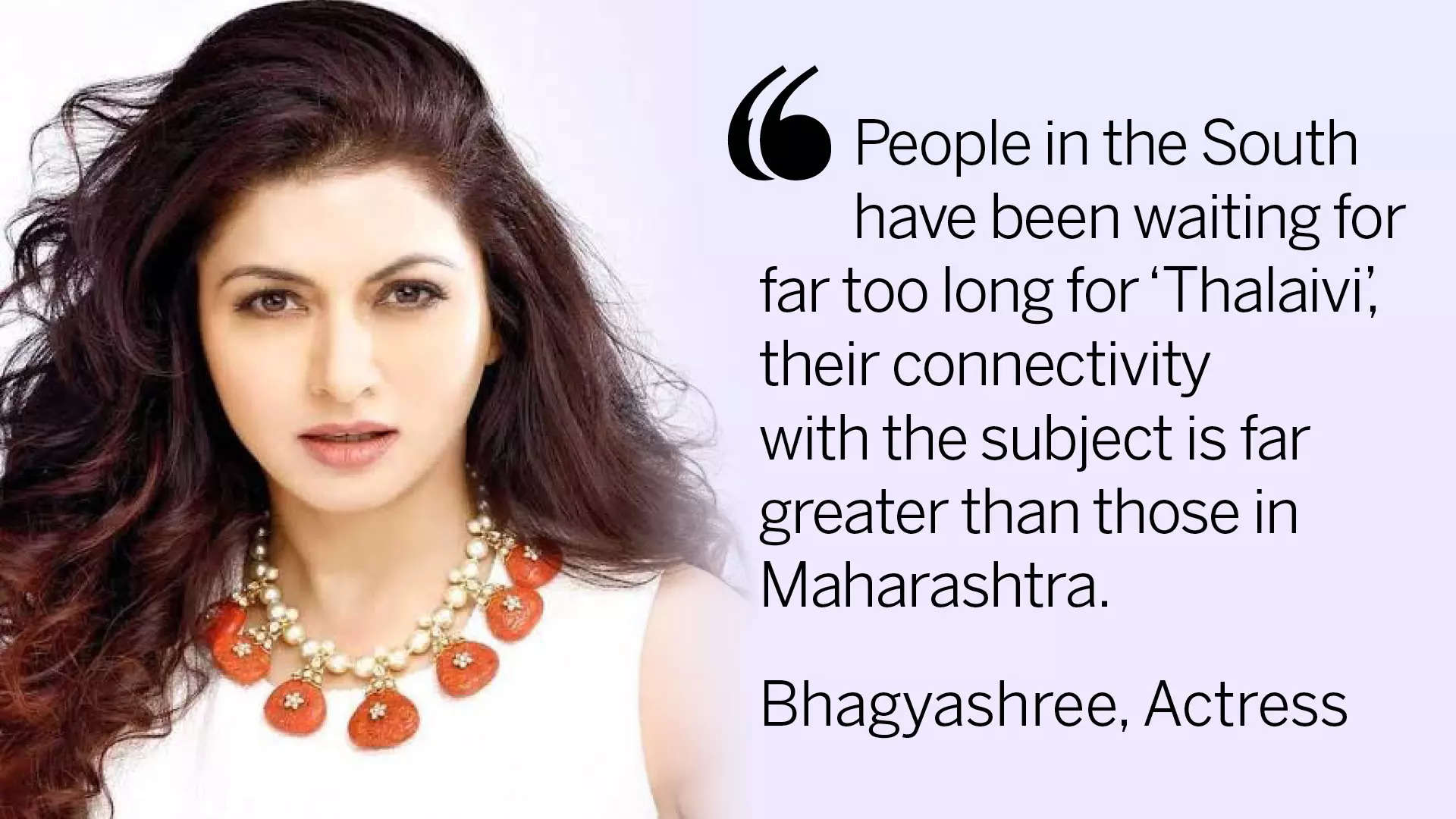 Opining that filmmakers must release their projects, Kunal Sawhney urges, “Though Maharashtra plays an important role as its contribution is 25%, but production houses should not hold movies anymore as from October we will have huge lineup and audience will come for good content.” Agreeing to the same Bhagyashree adds, “Even for the producers, who have invested so much money, you can’t just sit on it. It is important for the producers to release it in a given time.”

For the coming years the Milap Zaveri sees a trend of only Big ticket releases ruling cinemas with OTT lapping up rest of the content. “Big films like ‘Sooryavanshi’, ‘Satyameva Jayate 2’, ’83, will hold on till Maharashtra opens up. Although ‘Bell Bottom’ has done a valiant effort of starting the process, as weeks go by things are looking up, states are opening up to 100% capacity. Going forward, for atleast a couple of years, cinema is going to be about big scale entertainment, it is going to be about mass, masala movies, potboilers, big actors. The niche or multiplex films will now find its way on OTT more often than not. But the big ticket cinemas, where the masses enjoy in theatres, I think that is going to be the future of cinemas. If you see a ‘Master’ or a ‘Crack’ in South, ‘Chal Mera Putt 2’ and ‘Puaada’ in Punjab and Hollywood movie ‘Godzilla versus Kong’ – all these are big commercial entertainers, meant for the masses and all have done exceptionally well. Big scale movies are attracting people to theatres and I am confident that when ‘Sooryavanshi’ arrives in theatres, there will be lines outside theatres.” 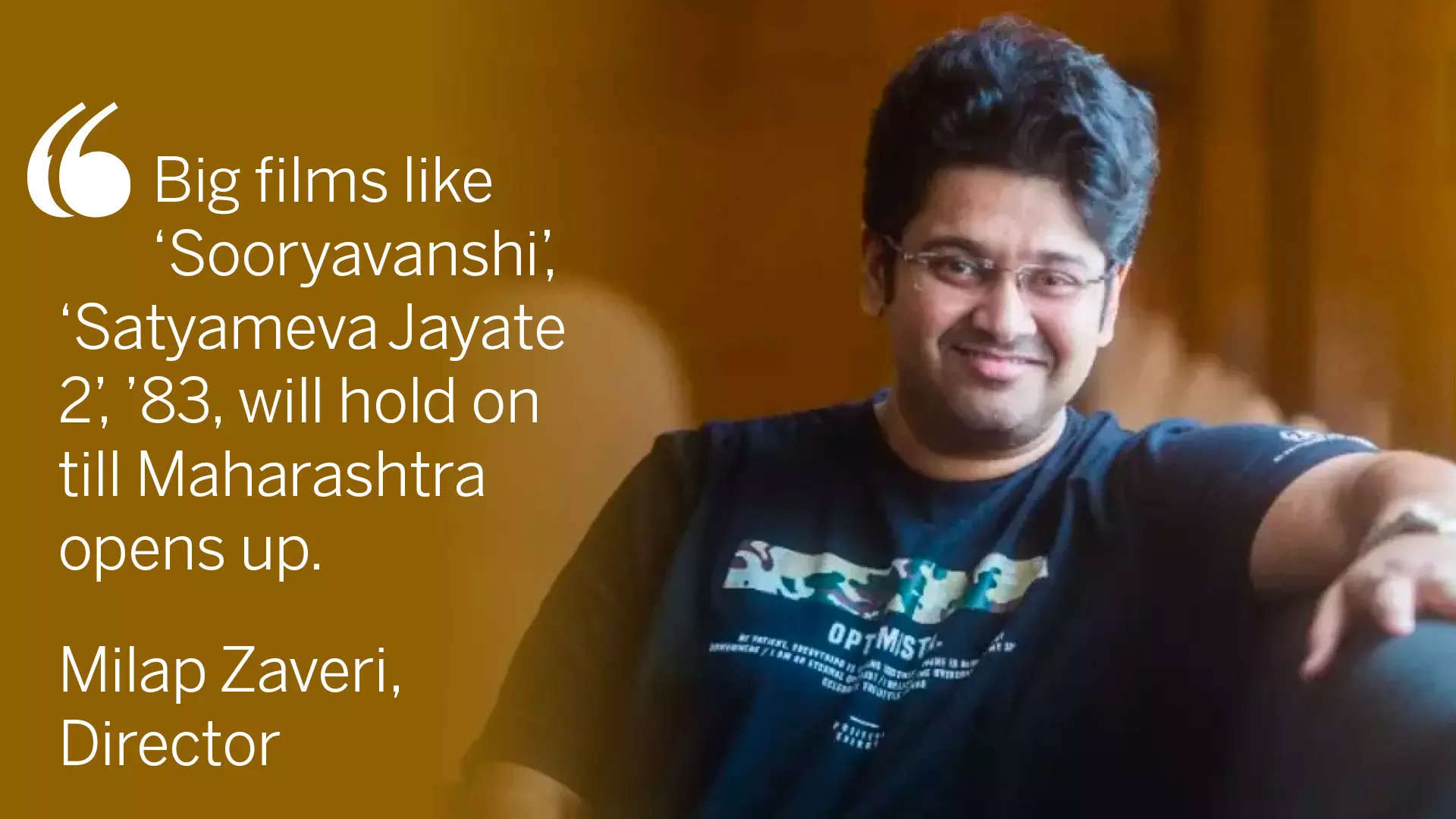 With Shershaah’s success, is OTT the new normal?
Sidharth Malhotra and Kiara Advani starrer ‘Shershaah’ wrote history with its massive success on streaming platforms. This war drama released after several delays and managed to win hearts. Apoorva Mehta, CEO & Producer – Dharma Productions, doesn’t seem disappointed on missing out on a theatrical release for ‘Shershaah’. “A lot of research and hard work has gone into ‘Shershaah’ and we were indeed looking at a theatrical release, but having said that, for us it was more important as producers that the film should have a wide release. With Amazon, we have been able to reach 240 countries, which otherwise would not have been possible. OTT has allowed people to access content and in return it has given us a lot of love.” After holding onto the film for over a year, we asked what was the deciding factor to finally agree on a digital release for ‘Shershaah’, and the film producer reveals, “A decision like this is based on many factors, how long you have been holding on, what are the risks for the stakeholders. For us it was important to release ‘Shershaah’ on an important date and there was no better date than Independence Day. So the release date was of paramount importance. We realized that people are still very worried about going to the theatres, which we have seen with a few good films releasing in theatres right now. There still seems to be some fear. So for us waiting for another year to capture this date, that didn’t make sense, we had already done that for a year and we really wanted people to enjoy it.” 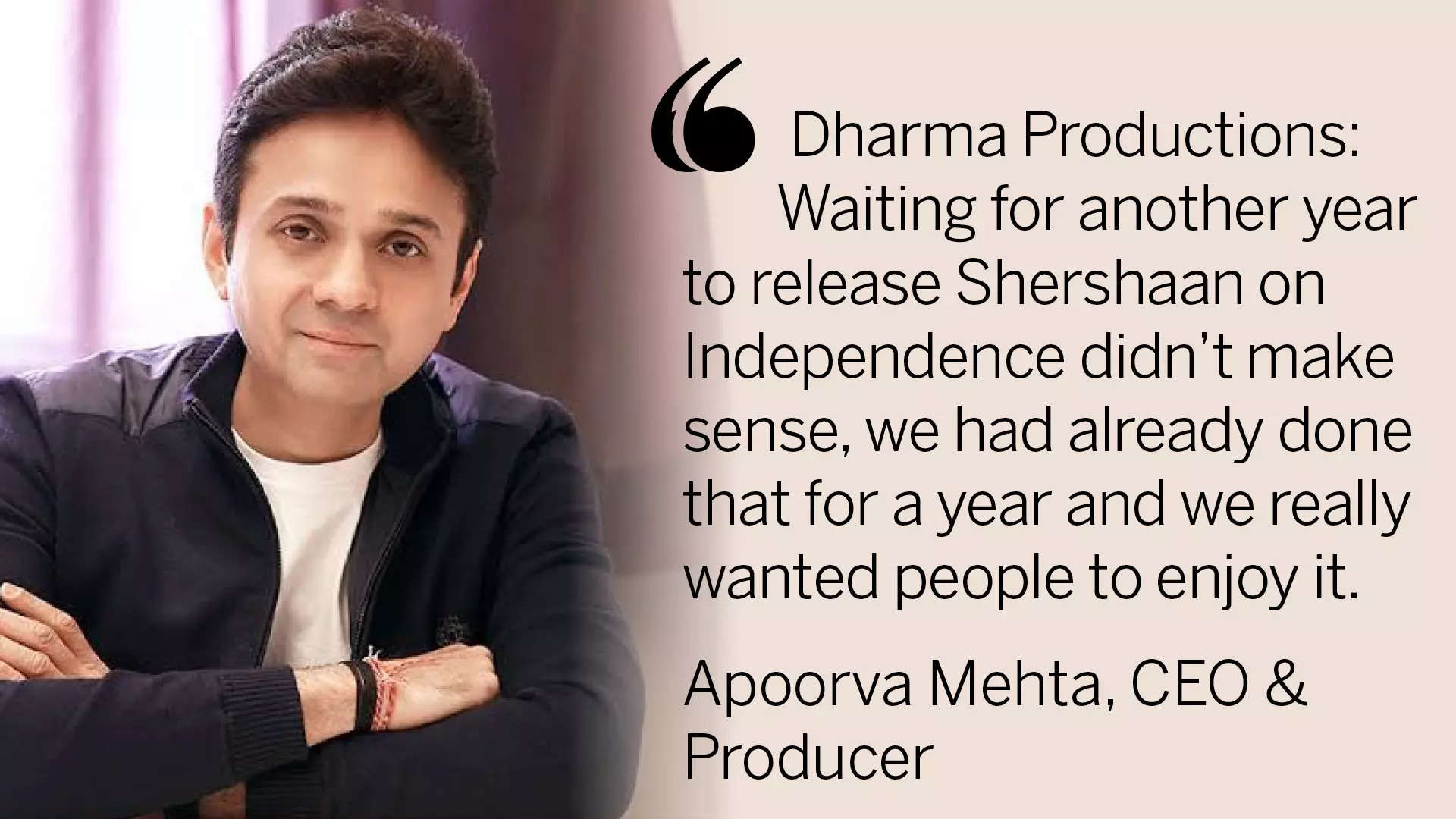