As the fans await the release of Rana Daggubati’s highly-anticipated movie, Haathi Mere Saathi, the actor recently released a delightful piece of an update on the movie. The actor revealed that his movie will have a digital and TV premiere after the decision of its theatrical release was kept on hold. Read on to know more about the movie and the premiere date.

Rana Daggubati recently took to his official Instagram handle and posted the thrilling trailer of his upcoming movie, Haathi Mere Saathi in which it was depicted that the movie is all set to premiere on television and the OTT platform Eros Now. In the caption, he mentioned that the fans can enjoy the film on 18 September direct to TV release and asked the fans to catch the trailer. He wrote, “Haathi Mere Saathi Television Premiere Witness the biggest battle to save the elephants. Watch #HaathiMereSaathi on 18th Sept, direct to TV release on @zeecinema and stream only on @erosnow. Catch the trailer now.” (sic) He further tagged some of the significant cast members in the post from the film.

Many of the fans took to Rana Daggubati’s Instagram post and poured in hearts and heart-eyed emojis to depict how excited they were to learn about his movie’s release on television while many others stated how eagerly they have been waiting for the film. As the Tamil and Telugu versions of the film were released in March, some fans also commented on how his performance was amazing in the film. There were also a couple of fans who mentioned how sad it was that they will not be able to watch the film in theatres while others praised the trailer of the film. Take a look at some of the fans’ reactions to Rana Daggubati’s latest Instagram post. 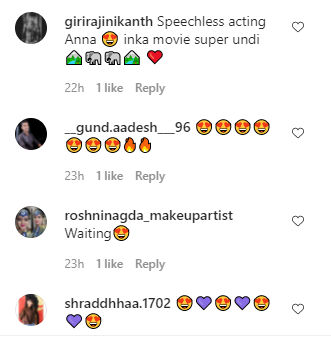 Apart from Haathi Mere Saathi, the actor has a bagful of projects that includes movies namely Virta Parvam, Bheemla Nayak and RRR. Virta Parvam is the upcoming Telugu period drama film in which Rana Daggubati will be seen alongside Sai Pallavi,  Priyamani, Nandita Das, Naveen Chandra, Zarina Wahab, and many more. In Bheemla Nayak, he will be sharing screen space with popular actors such as Pawan Kalyan, Aishwarya Rajesh and Nithya Menon. Daggubati will also be one of the dubbing artists for the Telugu version of S S Rajamouli’s RRR.