Bollywood actress Shilpa Shetty Kundra is reportedly planning to separate from her businessman husband Raj Kundra, who is in police custody for his alleged association with an adult film racket.

According to a report published by Bollywood Hungama, Shetty Kundra is planning to move out of her home in Mumbai, along with their two young children. A friend of Shetty Kundra has been quoted in the speculative article that claims their marriage is on the rocks.

“Raj Kundra’s troubles aren’t going away in a hurry. On the contrary, they seem to be multiplying every week. The disclosure of Raj Kundra’s alleged link with adult content came as much a shock to Shilpa as to the rest of us. She had no clue that the diamonds and duplex were coming from nefarious resources,” said the source to Bollywood Hungama.

Shetty’s personal life has come under intense scrutiny when her husband — an industrialist and a former owner of a cricket team in the Indian Premier League — was arrested in July for being a part of an adult film production ring. Mumbai Police claim that Kundra and his allies used to force women to engage in explicit videos, but Kundra has denied any wrong doing. He’s now seeking bail.

Meanwhile, Shetty Kundra has returned to filming and judging the talent show ‘Super Dancer 4’. Kundra and Shetty Kundra got married in a lavish manner in 2009 and their wedding was attended by several Bollywood A-listers and well-heeled guests.

Shetty Kundra has been posting cryptic messages about her situation on her social media handle. Her recent Instagram story post was an excerpt from a book that touched her deeply about making mistakes in life.

“We can’t make our lives interesting without making a few mistakes here and there. We hope that they won’t be dangerous mistakes or mistakes that hurt other people. But there will be mistakes. We can see our mistakes as things we’d like to forget or as our most interesting, challenging and stimulating experiences. Not because of the mistakes themselves but because of what we learned from them,” the excerpt read.

She also made it clear that she is yet to comment on any controversy surrounding her husband’s arrest.

Her sister Shamita Shetty, who is now a contestant in the latest ‘Bigg Boss’ season, has also openly supported her sister for her quiet strength.

Earlier, Shetty Kundra was in the news for breaking down while filming ‘Super Dancer 4’ after she was given a warm welcome from her colleagues. 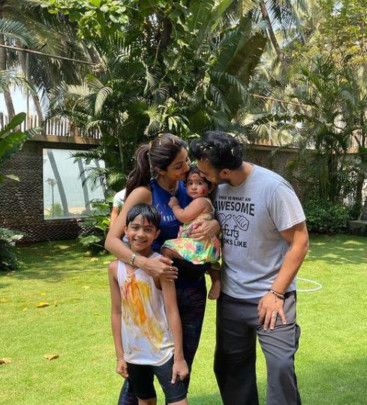 Shilpa Shetty with her family

The actress has consistently maintained that she was unaware of her husband’s unsavoury business dealings.