Breaking plates might invite the wrath of one’s family members or be an indication of anger. However, some of the celebrities of the film industry broke plates at a restaurant recently and it was not to protest against the quality of the food. Neetu Kapoor, Riddhima Kapoor Sahni and Manish Malhotra celebrated in this unique way at a recent party in Mumbai.

No, Neetu, Riddhima and Manish did not invent the celebration style. They just happened to visit a Greek restaurant on Monday night and followed the European country’s custom of breaking plates as a way to feel joy and celebrate.

In videos that Neetu posted on her Instagram stories, one could see a group of people forming a circle around broken plates and dancing. In one of the videos, the veteran actress too was seen with a plate in her hand as she watched a man smashing a bunch of plates onto the ground.

Neetu seemed to have loved the experience as she gave a shoutout to the place, along with a photograph of her posing with Riddhima, Manish and the others. 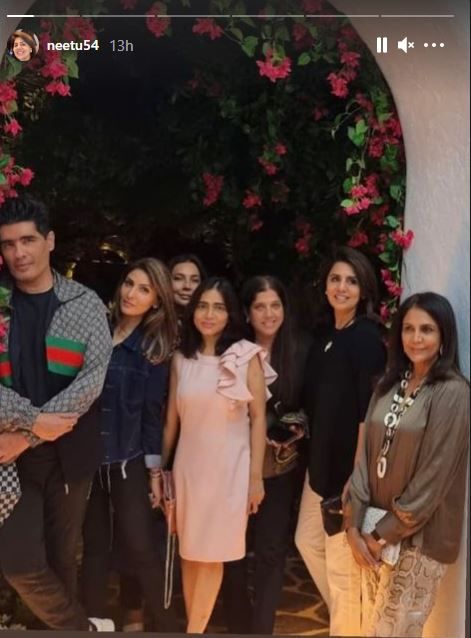 The celebration for the mother-daughter duo was after they shot for an episode of The Kapil Sharma Show earlier in the day.

Sharing pictures of the duo with Kapil Sharma, she wrote that it was ‘Always so much fun’ with the actor-comedian. The Besharam star added that her daughter made it ‘more fun and exciting’. She further urged her fans to ‘stay tuned for the joyride.’

Dressed in a stylish green outfit, Riddhima wrote, “Take time to make your soul happy…Had one of the most amazing (laughter) filled evenings yesterday at @kapilsharmashow with mom @neetu54 ♥️”.

Neetu Kapoor on the work front

Neetu Kapoor is all set to make a comeback to films after a gap of 8 years. She was last seen in the movie Besharam, where her late husband, popular actor Rishi Kapoor and son, actor Ranbir Kapoor were her co-stars. She will now be seen in the movie Jug Jugg Jeeyo.

The movie also stars Anil Kapoor, Varun Dhawan, Kiara Advani, among others. At the time of the launch of the movie, she had called it her ‘first flight’ after a while and that she was nervous for this journey. She had then stated that she knew Rishi Kapoor was with her on the journey, while also thanking Ranbir and Riddhima.