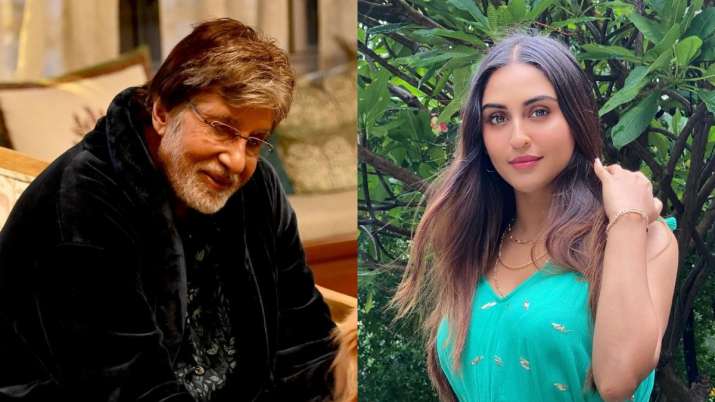 Chehre: Krystle D’Souza shares ice-breaking moment with Big B as she gears for her Bollywood debut

Even in her wildest dreams she could not have imagined that she would make her Bollywood debut with the legend of Indian cinema, Amitabh Bachchan. ‘Chehre’ actress Krystle D’Souza says meeting the legend, and starting a conversation with him, could have been a speechless moment for her, but a thoughtful gesture on the part of the Big B changed it all.

Krystle said, “I cannot even begin to tell you how nervous I was and it was the first time my mother came along with me for the first day of shooting. Of course, my mother also had a dream to meet Mr Bachchan as we are a family of Bachchan fans. But when I saw him for the first time, that aura that he has, made me so nervous and for a moment I didn’t know how to start the conversation. My eyes were wide open and seeing him…that man with a baritone voice.

“He walked towards me, and said, ‘Hello Krystle, this is Amitabh Bachchan, it is nice to meet you!’ And then sir smiled. I think that was it for me to realise that he is such a humble and easygoing individual and he is trying to ease me. Since then, I really felt comfortable around everyone.”

She went on, “We have a great mix of actors of two generations in the same film. On one hand, I got a chance to work with our all-time favourite Emraan Hashmi and on the other hand, I also worked with veterans like Annu Kapoor and Raghuvir Yadav among others. Honestly speaking, it could not have been a better debut for me.”

Krystle is playing the love interest of Emraan in the film ‘Chehre’ which is a mystery thriller directed by Rumi Jaffery.

The release of the film ‘Chehre’ was delayed due to the pandemic and finally, it is releasing in theatres on August 27.

Asked if the delay in its release worried her and Krystle said, “Initially, of course, I was heartbroken a little because I was super excited about my film. As I said, it is a dream come true with all things perfect, be it the cast, story, my role in the film. But when the pandemic happened and we all realised how people are losing their lives, it was certainly not the right time for a film release.

“So, eventually, I only had gratitude that at least, when normalcy surfaces, I have a film to release, I have a reason to celebrate life and the fact that I and all my loved ones are healthy and happy. The release date of a film was too small a problem to sulk when people lost their lives due to a deadly virus.”

This amazing article on “Chehre: Krystle D’Souza shares ice-breaking moment with Big B as she gears for her Bollywood debut ” was originally found here